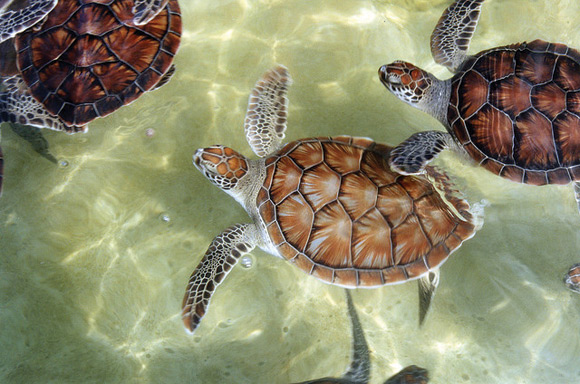 Sea turtles, beautiful creatures.
If you look at their face, it probably seems they are always grumpy.

Well, if you are treated like a toy, you would be grumpy too!

It is well-known that you should be very careful to believe the ‘facilities’ that ‘help’ animals.
Always do your research and if you are not sure, look at the details. You know in your heart when an animal is réally free.

“Every year, nearly two million tourists flock to the Cayman Islands — and over 300,000 visit a facility now called the Cayman Turtle Centre: Island Wildlife Encounter (CTC), which claims to be helping the endangered green sea turtle by breeding the animal in captivity.
The facility began as commercial operation in 1968 when people took young green turtles from the beaches and went into sea turtle nests to take their eggs — over a decade, they gathered at least 477,644 eggs.
Many of the tourists who handle the sea turtles at CTC, holding them up for photo ops and struggling to keep them steady as they flap their flippers, appear to have little understanding that many of these turtles will be slaughtered and sold for their meat and shells.”

In the article below you can read more about it.
Again, it is not about eating a turtle, it is about how you treat animals.

Article on thedodo.com about the sea turtle nightmare

Filed Under: Animal friends
Tags: Animal cruelty, Sea Turtles, Tourism
What to do if you find a baby bird
A stand against captivity